The Horseplay Theater debuted their spring musical Little Shop of Horrors last Thursday. The horror comedy featured an up-and-coming botanist who fathers an alien carnivorous plant with an appetite that can only be satisfied by human flesh and blood.

“Saturday night left me in tears,” assistant director Mina Hughes said. “It was such a good representation of all our hard work. I wish everyone could see the process from casting to going up onstage because it just makes it so much more amazing that these people who couldn’t keep a tune could put on this amazing show. It was amazing.”

Although the show seemed quite smooth onstage, the backstage production behind Little Shop was a gathered effort between the performing arts faculty and students alike. In fact, senior Hannah Meade was tasked with choreographing Little Shop as soon as last year’s musical Grease ended.

“We started having meetings [last year] and talking about our visions,” Meade said. “We started to plan it out and around October, we started to cast the show and meet everyone.”

When the cast initially came together as a whole, theater veterans found a new optimism for their final product.

“I really liked meeting the cast for the first time because it was like things really were working out in our favor,” Meade said.

However, putting a musical together in a matter of months isn’t always an easy experience. Though the cast had both dedication and talent, the end goal of putting on the best production possible can occasionally be exhausting.

“One of our biggest challenges was when our lead actress [Emily Smith] got tonsillitis, so we were all really worried about that and had to take some extra time with that,” Hughes said. “It felt really good when she came back and we all had the ability to bring her back up to speed. She put on an amazing show.”

The determination to produce an unforgettable show was enough for the troupe to find motivation through the challenges. Little Shop provided an opportunity for Horseplay Theater to test new waters and explore different talents.

“I love the Mushnik and Son number that Hannah choreographed,” Hughes said. “It was brilliant. I’ve never seen work like that on a Broadway stage, and it was so cool to put it on a high school stage.”

The cast underwent considerable growth over the course of the production; however, the musical also gave individuals a chance to mature, and even paved a new path for the students’ future.

For the actors themselves, there was also a chance for personal expression, especially for lead actor Jamir Brown who played Seymour.

“My favorite thing was probably being goofy because I’m goofy as Jamir,” Brown said, “but Seymour was a different type of goofy, and that was really fun to portray. [Onstage] you get to be crazy and people don’t judge you.”

Even some faculty had the chance to find a character onstage. Assistant Principal Eric Landgrebe had a brief cameo in Act I. What most people didn’t notice, however, was that choir director John Gallagher was the conductor for the stage band as well as the voice for Audrey II. The balance between conducting and holding a performing role was a new feat for Gallagher.

“It was difficult at first, but as we kept on rehearsing, it started to feel a little more natural,” Gallagher said. “I’m a choir teacher, so I naturally kind of listen to the voices first, but there were a lot of times where i needed to be focused on the band, so learning when i need to focus on what was probably one of the most difficult things.”

Although Gallagher was in charge of the band in the pit, he also held a responsibility for ensuring the musical aspects onstage were up to performing standards. While the music served to be challenging, the cast did not disappoint.

“As a whole, Little Shop is a more difficult show than Grease is, so it was a big step up for us,” Gallagher said. “The music is quite a bit more difficult, but I felt that the kids did a really good job with it. We gave them more difficult music, and they just took it and ran with it and they worked harder so they could get better.”

Overall, the cast of Little Shop found a lot of pride during their opening weekend.

“I think this is the best show we’ve ever put up,” Hughes said. “[I watched] people grow from not-really-actors to just these brilliant people on stage who could be put on a Broadway stage and not even know the difference. We’re all really proud of what we’ve put up. Because we’ve just renamed ourselves Horseplay Theater, it’s a great way to come out as our official coming out, it was as great show. There was nothing we could’ve done better.”

Little Shop of Horrors may be over, but the 2015 lineup hasn’t ended for Horseplay Theater. Preparations for Wiley and the Hairy Man have already begun, as well as the annual production for the UIL One-Act Play, in which the troupe will perform Children of a Lesser God. 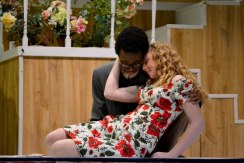