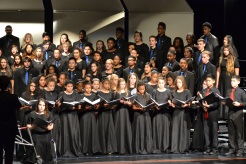 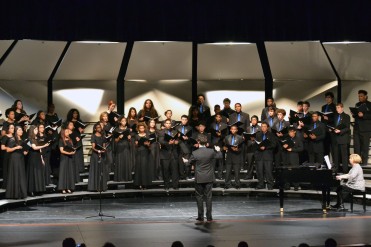 The choir and band students of Manvel High School both honored former and currently serving members of the Armed Forces on November 5th and November 11th. The choir concert was held in the MHS auditorium. The concert featured choirs around AISD such as Manvel Junior High, Rodeo Palms Junior High, and Nolan Ryan Junior High. All schools showed their respect to veterans.

“We did all of our preparations in class,” choir teacher John Gallagher said. “Practicing in class was the main way.” Gallagher and his students tried to find songs that would convey a veterans-type theme to the concert, such as the Star-Spangled Banner. “We tried to pick music that fit themes common to veterans, such as songs about people risking their lives to help their friends and leaving to travel to faraway places,” Gallagher said. “I think they really enjoyed it.”

The Manvel Maverick Marching Band participated in a Veterans parade held in Angleton. The band played “Fight Song” to bring an inspirational feel to those who were once and still are in service. Other bands from AISD also showed their support by performing in the parade. There were also elementary school children and even local people that waved as the Mavericks played their song in honor of our Armed forces. “The parade was quite different from the normal ones we participate in,” senior Aisling Hagan said. “I think we did a good job and I actually enjoyed doing it.”